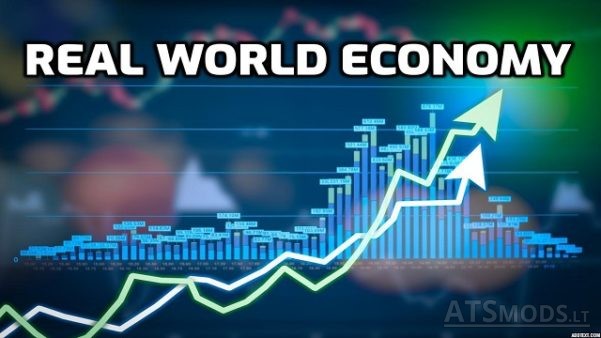 The objective of this mod is to give you an exposure to the real world trucker’s economic conditions. Every minute details of the economic system of the game have been studied, compared with the real world, and modified to make the game totally realistic.

Every minute detail of the things that has been made realistic:-

1)Truck Prices/Parts
The price of every truck has been checked through the internet and updated accordingly.SCS has done a great job as most of the trucks have realistic prices already.

3)Bank
the bank is the most important part of a American truck drivers career. The banking system has been modified as follows:
i)9 Loans:- Added 5 more loan amounts. Now, there are a total of 9 different amounts of loans that can be availed.
ii)Interest Rate:- The interest rates have been made real. The interest rates have been increased slightly.
iii)Time duration:- The time duration in the game to pay the loans are way more unrealistic. Generally, a vehicle loan lasts between 2-5 years. The values have been updated according to the data available on the internet.
iv)Credit Limits:-in real life, credit limits are calculated based on your earnings. But in-game, SCS calculates credit values based on your level, I have increased credit values up to 5 Million dollars which will increase till Level 70.

3)Fuel prices
fuel prices have been updated for every country according to the data on 6th July 2020.

4)Towing and Refueling prices
these prices are updated according to the real-world prices. Eg refueling is quite cheaper in the real world.

5)Police fine
police taking 140 dollars for red-light jump and just 200 dollars for crash is way more unrealistic. Fines are now updated according to the information about the fines in France.

6)Ferry/Train Prices
these prices are updated and the info was collected from private ferries’ websites.

7)Ai Drivers
the majority of profits earned by Ai drivers now go to you. AI drivers are paid wages realistically. Now, there is not much difference between the earnings of you and ai driver. But, the difference is that a share of ai driver’s earning is given to you.

8)Time Limits
the time limits to deliver the trailer/cargo has been made realistic according to the data collected from the Web.

9)Currency of the world
currencies of more than 60 countries have been added to make you feel home country. Players from countries that have a high currency conversion rate will feel the game way more realistic as you won’t earn millions from a deliver :D.

10)Trailer Prices
the prices of trailers have been updated accord to real-world data.

11)Tollgate
I have updated the toll prices for all the countries except Italy and France. I will update their value in future update.

12)Damage Data
the real American truckers are really excellent at their job and usually don’t deal with damages to trucks unlike us. Although, the damage data by SCS is very realistic but a not so good player can’t maintain finances with such damage data. So, to balance out the money, the damage rate has been reduced slightly.

If you think any stone is left unturned to make the Economy just like a Real-world Economy then do mention it in Comments.