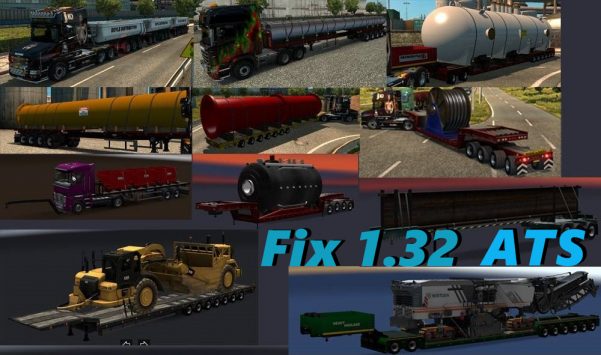 This is a temporary definition fix for Chris45 Trailers pack in order to work in 1.32, until Chris45 will decide to fully update his great pack.

You need to place this fix above the main mod found here:

Attention!! this is and adaptation of the ETS2 pack, not a fix for the original ATS version. this fix is for the same base mod as my fix for ETS2

Not all cargoes have been updated! only the best heavy cargoes and all doubles in total about 50% (too much hassle as most of the files require to be updated individually)

there are also more trailers and cargoes in traffic

in order to eliminate all errors and warnings you need to remove the entire def folder from the main pack!

other remarks:
-there are no ownable trailers in this fix!
-the weight of the cargoes was only estimated, it may not be the same as the original
-many thanks to Chris45 for this great pack, I hope he will fully update this pack one day