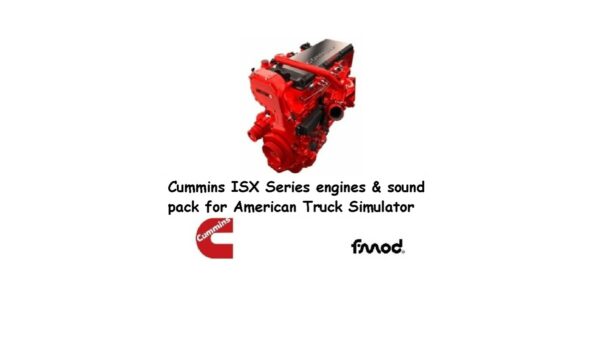 One sound variant are based on Kapitan Kriechbaum’s audios and another two from Odd_Fellow, adapted according to use of mods prior to 1.36 ATS.

Tested on American Truck Simulator versions 1.39 to 1.46 beta per FMOD guidelines, includes engine sounds in the game’s convoy mode (only available since version 1.42). .

Updates:
v 1.9
-Change of icon in the purchase options in the workshop (to avoid author confusion).
-Addition and/or trimming of some sound samples for the Cummins ISX Signature.
-Slight improvements in exhaust sound positioning only on Straight Pipes and Open Pipes variants.
-Added ISX Open Pipes engine idle exhaust track.
-Removed sound variant (not option) from Volvo variant ISX, will be added in another engines mod, and replaced by Kenworth variant.
-Rename of the sound banks (if you have the previous version of the mod, it is recommended to change the engine in the workshop and replace it with the new version in your Manager).

Important:
Please unzip the file before installing it in your mod manager to avoid errors reading the game.

To see which trucks are supported by the Cummins ISX engine mod, in the SCS file use a zip/unzip program (such as WinRAR, 7Zip, etc.) and find the “Truck Support Listing” .txt file.