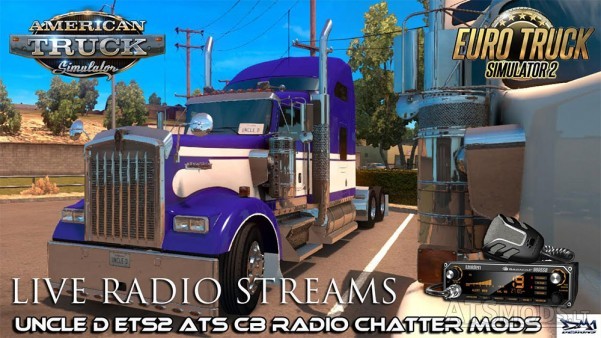 OK driver’s, I received lot’s of requests to see if we could come up with LIVE streaming of CB Radio Chatter for the radios in American Truck Simulator & Euro Truck Simulator 2. I’m happy to announce a 1st live stream CB channel for sims featuring Channel 6. Now lets 1st get something straight drivers, if you don’t have a decent internet connection speed streaming is not for you and stick to using my pre-recorded mods instead. Next, CB radio chatter is for mature mined drivers, these guys talk about any and everything and don’t watch their mouth’s at times when broadcasting so you might catch something in a live stream not cool for the kids ok. Now if you DO have a decent internet connection here’s what you wanna do with this playlist file, all you’ll need to do is drop this file in your MAIN ATS or ETS2 sim folder, NOT MOD OR MUSIC FOLDER, you will be prompted to overwrite the file, click yes and your all set, open your sim go to the radio stream side and if you did it right you should see the list, included in this playlist is some other music radio stations from rock, to pop, to country to hiphop etc etc etc you’ll have to scroll through the list. I’m planning to add more CB streams to this list in the near future. included in this list is my indie radio station stream MMS World Wide Radio Network of new up and coming HipHop R&B & Reggae artists from around the world. So for now enjoy Channel 6 and the music and I’ll be back at cha with new streams added soon!