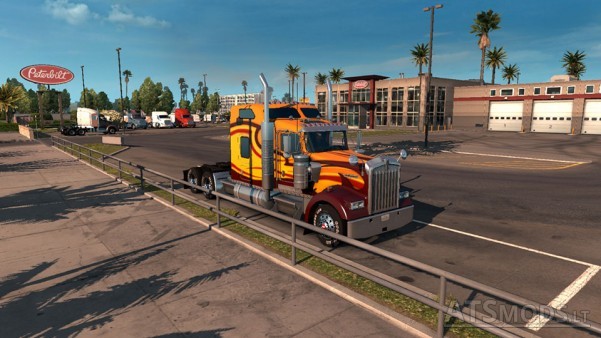 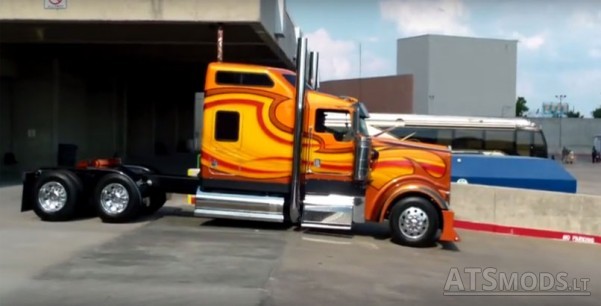 This is Survivor.
The real truck and story.
Survivor. A 2000, W900L that is owned By Chris Anderson. The KW started life as a Purple truck. After Chris was diagnosed with stage 4 terminal throat cancer. Chris sold his truck to a Kenworth dealership, purchased a truck that was ‘good enough to get the job done.’ After saving enough money to pay their bills for when Chris began his treatments, they were ready. It was immediately after Christmas, Chris spent two months of enduring radical radiation and chemotherapy. After 40 sessions and loosing over 100 pounds, the cancer went into remission. Chris stated, “After I had gone through with my treatments, I fought my way back!” He was soon back in the seat of his truck, running as much as possible to get his family to where they were before this disease drastically invaded their lives.

About a year later, on an ordinary day in Indiana, Chris looked in his rearview mirror and caught a glimpse of a truck. In that very instant he knew what he had to do. With a sense of desperation, he was able to get the driver to pull over and the two had a quick conversation about the stranger’s truck. The 2000 W900L purple Kenworth looked all too familiar to Chris. It surprised the driver when Chris announced that he was the former owner of his truck, but it was his response that took the cake. “He told me, ‘I thought you were dead!’ And I said, Ya know, that’s what everybody keeps telling me.” After some more talk, the two guys worked out an agreement and by the end of that year Chris was back in his truck.

Just when things seemed as if they couldn’t get any better, another turn of events took place. In 2009, Chris’s grandchildren submitted his information to have his truck on a television show, Trick My Truck, featured on CMT. The show is known for “stealing” big rigs and returning them to their owners after the creative mechanics have completely customized the trucks to their fullest and wildest dreams. Chris’s truck was one of the eight selected out of 250. He shares, the denial that went through his mind when he was first contacted. “When I answered the phone the first time, I thought it was someone playing a prank on me. Then my wife called me, saying that they called her too. It was crazy! I just couldn’t believe it.” He explains that the day of the big reveal was equivalent to him winning the lottery. The guys from Trick My Truck named his custom designed big rig after its rightful owner, Survivor.

So in keeping with that. I have named this truck skin Survivor. and is my tribute to all who have to endure cancer and come out the other side the winner. To our friends and loved ones who are facing Cancer. Keep up the fight. We are all behind you.