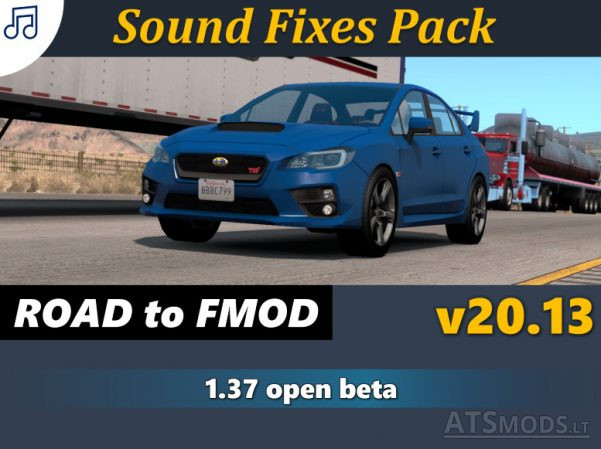 — Road to FMOD v20.13 —
This version of the mod is in a work in progress state as the mod is getting converted for 1.37’s new sound engine.
As such, features from previous versions of the Sound Fixes Pack will be brought back when they’re ready.

*Real engine and real idle sound for 2015 Subaru WRX STI in AI traffic.
*Unrealistic phrases removed from English Doug UK/US and Skye UK/US voice navigation.
*Speaker effect for English Doug UK/US and English Skye UK voice navigation for increased immersion.
*Retro/historic ding sound for while the fuel is pumping (circa 1960s to 1970s). The number of dings can help give you an idea on how much you refueled.
*Real button sound for hazard light button.
*Improved sound effects for trailer coupling.

— Official SCS forum link —
The SCS Forum link below for Sound Fixes Pack holds all official download links and can be used to give feedback and ask any questions about the mod:
http://forum.scssoft.com/viewtopic.php?f=212&t=200919

Credits:
* SCS Software for base sounds
* Drive Safely for sound edits, some sound samples, and for compiling mod
* kriechbaum for light switch sound.