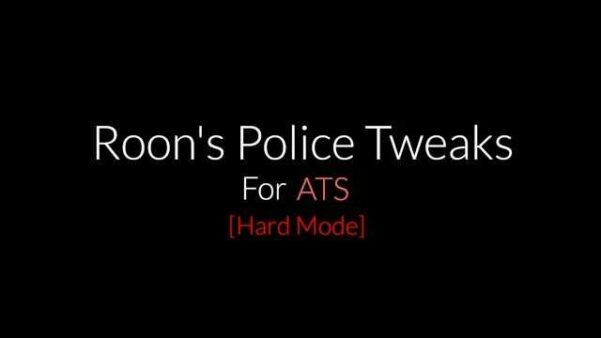 When I was looking for any better Workshop mod which tweaks the Police detection, CountVlad’s Police Tweaks mod is very outdated(It is still below 1.37) and doesn’t support the ATS version. erbkaiser’s Police Tweaks made the game much easier instead of simply tweaking the police.
Since there was lack of alternatives I decided to make own version of Police Tweaks mod which is actively maintained.
This is the hard mode of original Roon’s Police Tweaks mod; this mod is intended for players who thinks ATS is too easy for you.

Features
Delay before speeding fine while police car is present has been increased to 10 seconds
Speed cameras now have 90% chance to fine you
Now you won’t get fined twice if there is a police car nearby
There is zero possibility ‘No Lights’ fine unless police spots you
Actively maintained, supports ATS 1.43 and above versions(1.44, 1.45, …)

Hard Mode Features
All fines are now doubled
You start with 50% fines on Level 0, maximum 200% fine amount on progression
Speeding fine step and multiplier value are now doubled
Delay before fine for Avoid Sleeping violation reduced to 30 seconds (Was 60 seconds)