Realistic traffic 1.0 for ATS 1.35 by Rockeropasiempre 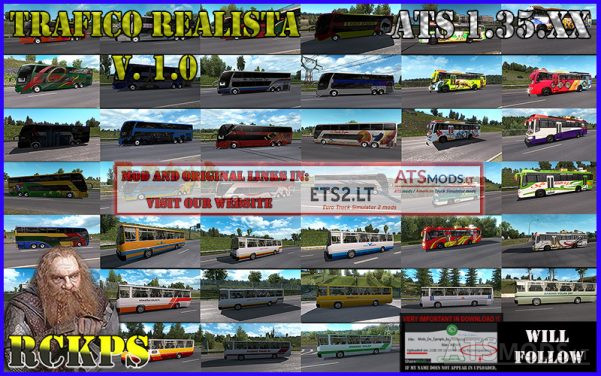 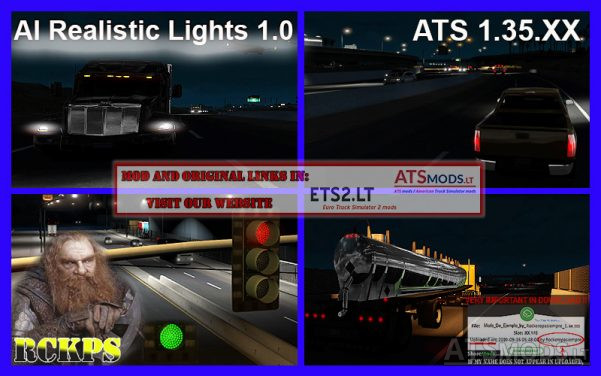 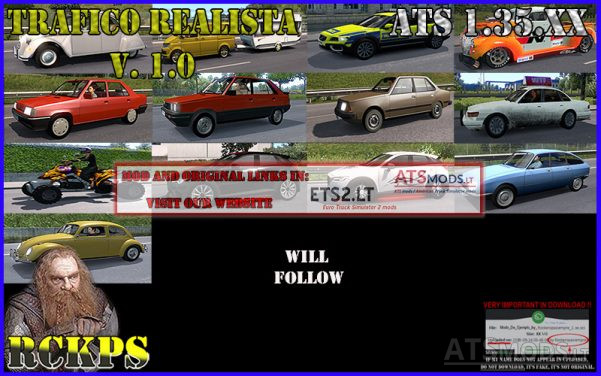 Realistic traffic 1.0 for ATS 1.35 by Rockeropasiempre

PROHIBITED UPLOAD THE WORK TO ANY SERVER WITHOUT PERMISSIONS.

* Thanks to my great friend Cipinho.

Sounds independent of some vehicles: Cipinho.

The mod manages traffic in a fluid and constant way. There is always traffic, both at night
as of day.
It contains the base game traffic + added traffic, which is detailed in the description,
and all AI Traffic, contains its own sounds.

There will no longer be 2 versions as before. All the extra sounds disappeared, and only
AI traffic are included.

– Place this mod, above maps and IA traffic packs.
– If you use Sound Fixes Pack, you have to put Sound Fixes Pack, on top of this mod.
– The mod contains the base game traffic + added traffic.
– Traffic IA, contains its own sounds.
– AI traffic behavior totally different from the base game.
– Little patient drivers with the horn.
– They return quickly after having an accident, either, with you, or between them.
– Moderate level of AI behavior in times of safety and caution.
– They warn with the turn signals more time in the change of lane.
– Lane changes on the longest AI highway. They take more time to advance.
– Spaced the safety distances of car trucks, and buses.
– Reduction of waiting times at traffic lights, and train level crossings.
– Processing times in weighing scales, halved.
– Reduction of refueling times, for all AI vehicles.
– Reduction in crossing times, Ceda el Paso, and Stop, of AI vehicles.
– Reduction of traffic light times in random events of road works.
– They are gradually interspersed, so as not to create traffic jams, at crossings and fast track additions.
– This reduces the time we will be standing, and offers a more fluid driving.
– Moderate increase in the amount of general AI, so as not to create lag on weak computers.
– Traffic on fast and secondary roads, always moderate, so as not to travel alone, day or night.
– Constant and moderate traffic in cities. For all types of vehicles.

Compatible with all maps and all dlc’s of the game.

Compatible with all IA traffic packs-mods.

AI traffic contains its own sounds.

All that incorporates the base game, with their own sounds:

One Response to Realistic traffic 1.0 for ATS 1.35 by Rockeropasiempre