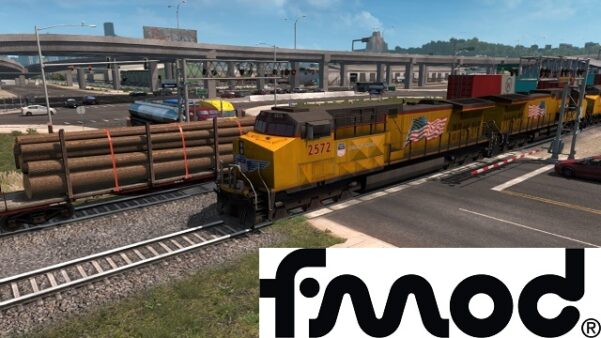 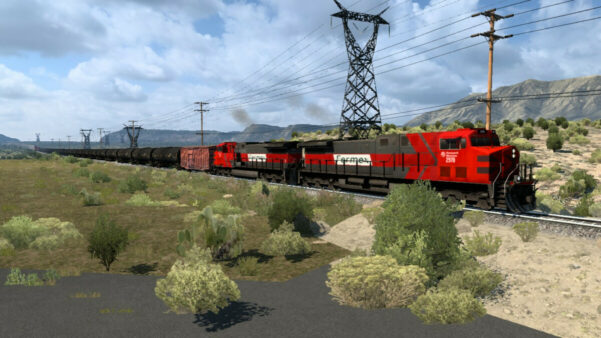 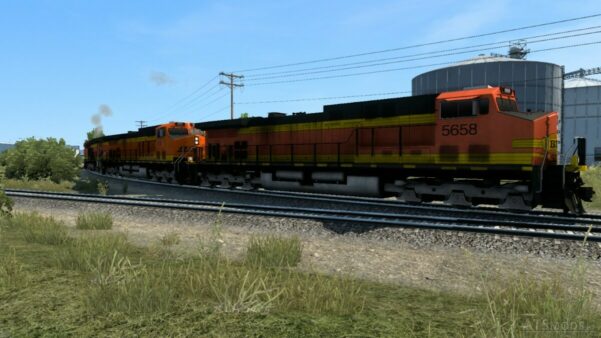 Add classic diesel and steam engines, railcars and cabooses for sightseeing trains
For locomotives and rail cars add skins with names of his real companies.
Now all freight trains are drived by more locomotives, from 2 to 5 coupled head DMUs and some additional in the mid and(or) the tail of the trains.
The length of trains has been changed, passenger: 3-15 railcars (30 for Autotrains). freight: 15-60 railcars(up to 150 with addon), depending on the number of sections and type of locomotives.
Added realistic train sounds in new FMOD Sound Bank format.
All passenger trains added a reverse section locomotive.
also increased stopping distance for the all trains and added a miscalculation of their real mass by the game for greater realism of their acceleration dynamics and behavior on descents and ascents. accordingly, for each raft, the power is set as a multiple of the power of all its locomotives (not everywhere).

Changes in 3.9 for ATS (v1.44x):
Mod has been fully restored, no need update patches anymore.
Found and fixed incompatibilities with the new version of the game.
removed pusher locomotives from the middle of the train
container trains have been moved to a separate class, now container railcars are not mixed with others
ballast wagons have been replaced with closed bulk cargo hoppers
add some new scs LODs to chassis definition files
rebuild file structure for new 1.44 game update
the source files were taken from the archives of the version of the game 1.44


Previous changes:
Added new livery for ES44 locomotives, BNSF and CEFX companies and updated livery for ATMRAK Dash8, Thanks @cometcrush for the textures specially made for this mod!
Added Union Pacific Switcher shunting diesel.(new SCS vanilla model finded in a game archives)
many models have been reworked in Blender 3D editor using updated shader presets in Blender tools.
the maximum speed limit for freight trains was increased to 85 km / h, the braking force was slightly increased.
the recently introduced realistically mixed trains were cut out, they are no longer readable by the game.
elimination of the conflict with the new coal wagon added by SCS (the carriage errors has been fixed)
added a new train parts cargo to the wagon platform
added car models: box, dump and tank ported from ETS2 for a greater variety of rolling stock (car textures will be American but differ in size)
return of the simultaneous appearance of two trains on multi-track railways
locomotive with tail number 1943 from the Cheyenne Wyoming Railway Museum, added to some of Union Pacific’s scheduled trains.
The sound bank has been rewritten, now the tonality of the sounds of the head locomotives (only the first locomotive) depends more on the position of their accelerator handle and not on the current speed.
the collisions of the railcar models were reworked to avoid unnecessary calculations of the interaction of collisions with each other during the movement of invisible and not externally manifested mutual collisions that loaded the computing system with parasitic calculations.
Fix for missing Trains and Trams in Denver Colorado.
fixed all possible compatibility issues with maps of Mexico and ProMods Canada.
the ratio of the number of regular trains in comparison with excursion and classic trains has been doubled (steam locomotives will become even rarer).
railway traffic to Wyoming and Texas for the future is registered. (Wyoming has a lot of steam locomotives, and coal cars; Texas has a lot of oil tanks).
The train spawn fix no longer works so trains can spawn (but not disappearing) next to the player again.(this problem has no solution at this time)

!!Long trains and Real density by Cip add-ons from older versions (3.8+1.44.1) are compatible!! Any other add-ons are not needed!

I RECOMMEND DO NOT INSTALL ANY REAL COMPANIES AND OTHER HIGH QUALITY TEXTURES PACKS ABOVE MY MOD IN LOAD ORDER, IT WILL BE RUINED ALL TRAINS TEXTURES OPTIMIZATION AND DROP FPS
This mod must be placed above any other third party mods that affect the trains, except for my own addons.
This mod are not compatible with any Train Sounds mod, sexcept for my own! (mod includes own unique sounds)
The mod does not support versions of game older than (1.44x).
!PLEASE INSTALL THIS MOD ABOVE THAN SOUND FIXES PACK IN ANY CASE! !PLEASE INSTALL THIS MOD BELOW THAN TRAFFIC DENSITY MODS!
(otherwise the game crashes)