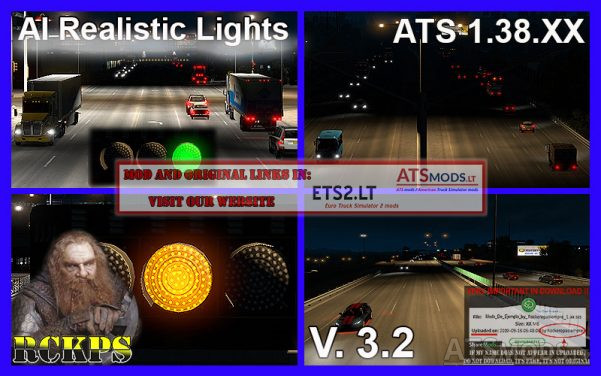 Please do not upload the mod to another server. Respect the author’s original link, thanks.

– This mod plays part of the game lighting.
– Detailed mod information in the game mod manager.
– Touch all general light intensity, both AI, and environment.
– Acts on headlights, taillights, and brake lights throughout the AI.
– Greater angle of light on the road, of headlights of IA vehicles.
– The flashes have been reinforced so that they have a more powerful light beam.
– Turn signals, taillights, and brake lights, much more colorful.
– Increased the beam of flashing light of vehicles and trucks.
– Act on the lights of the street lamps and traffic lights.
– Led’s traffic lights.
– Added led traffic lights for all countries.
– Increased saturation of red and blue colors of vehicles guide and police.