Addon for the Chris45 Trailer Pack 9.09 for ATS 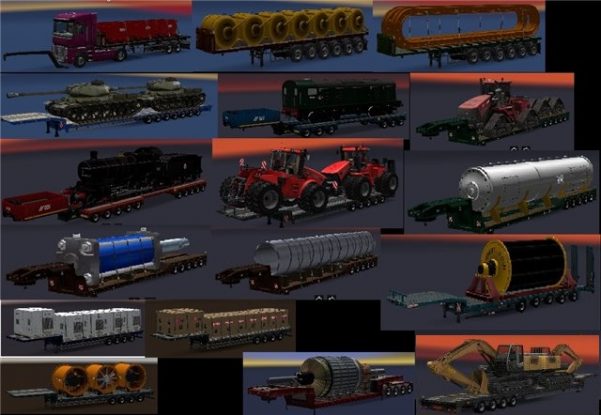 This addon is intended for fans of unusual traffic and heavy cargo.

This addition increased the mass 69 Chris45’s cargoes and replaces 10 cargoes with locomotives.

The basic mod you can download on this site or on other sites dedicated to this game, for example: ets2.lt/en/chris45-trailers-pack-v9-09-for-ets2-v1-30/

This addon does not claim to full realism.

WITHOUT BASE MOD WILL NOT WORK!

BASE MOD WITHOUT THIS ADDON WILL NOT WORK!

ONLY BOTH MODS TOGETHER!!!!

The archive also has a mini add-on that is not mandatory for installation for standard trucks, which upgrades the parameters for more comfortable transportation of heavy loads (added several real tuning engines with different sounds, one gearbox and one “heavy” chassis). Mini addon did for themselves, so any criticism and claims are not accepted.

P. S. If you find errors – write. It is desirable that there was a piece of log file(from game.log.txt) with a description of the error.

Credits:
Author of the base mod: Chris45 Author of this addon: Tornado

9 Responses to Addon for the Chris45 Trailer Pack 9.09 for ATS