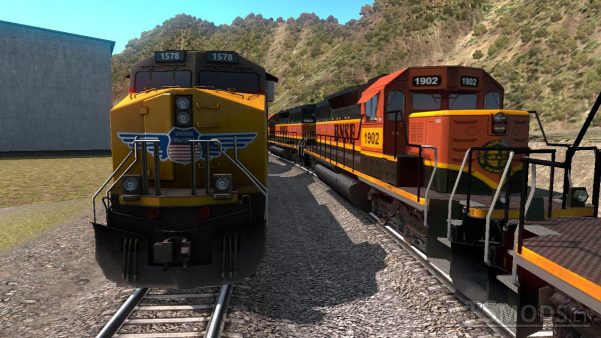 This Mod adding a More realistic American Trains based by PIVA train mod.
(only SCS sounds used)
+ my Exclusive content.

For some locomotives and rail cars add skins with logos of real companies.
Now all freight trains are drived by more locomotives, from 2 to 5 coupled head DMUs and some additional in the mid and the end of the trains.
The length of trains has been changed, passenger: 5-15 cars. freight: 20-60 cars, depending on the number of sections and type of locomotives.
The max speed of freight trains: 90 KM/h. Passengers: 150 KM/h. (NOT MILES/H!)
All passenger trains added a reverse section locomotive.
also increased stopping distance for the all trains.

Changes in version 3.4.alpha for ATS (v1.37 open beta):
deleted all old sounds from previous versions, add FMOD sounds to new locomotives and rail cars , changes for compatibility with 1.37 open beta
ATTENTION! (only SCS sounds are used at this stage) WORK ON RESTORING REALISTIC SOUNDS OF MOD, WILL BE CARRIED OUT AFTER THE PUBLICATION OF GUIDES ON THE NEW SOUND SYSTEM OF THE GAME!