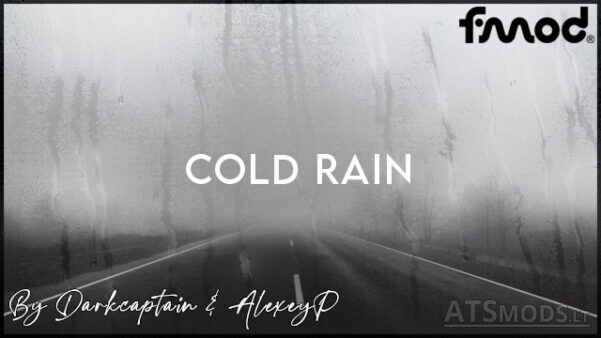 – The number of raindrops on the windows has been considerably reduced (better visibility on windows)
– Reworked textures of raindrops
– Slight changes in the behavior of the raindrops
– FMOD: Full compatibility with Sound Fixes Pack by Drive Safely
– FMOD: The sound of rain falling in the cabin has been improved (sound level, better transition for different intensities…)
– FMOD: Some improvements in thunder sounds (sound level, better fading effect, added some new sample…)
– Includes add-on: Increased raindrops on windows

– Textures of raindrops for windows and windshield have been changed
– Increased amount of raindrops from inside the cabin
– Rain textures have been improved
– The effects and behaviors of the raindrops on the windshield and windows have been changed
– The texture and effects of the water particles / spray on the wheels when the asphalt is wet has been changed (affects all vehicles, traffic included)
– Realistic rain sounds, such as drops falling in the cabin and the sound of rain with the outside view
– Realistic thunders sounds & greater variety (about 20 high quality sounds/samples)

Note: The thunder will be heard in an interval of between 1and 5 seconds when seeing the ‘flash’ (lightning), simulating as in reality.

– Must have high priority in Mod Manager. ‘Cold Rain’ on top (ABOVE) of Weathers/Graphics, Maps and Sound mods.
Link: https://sharemods.com/aclryax5tiba/_EXTRACT_THIS_FILE__COLD_RAIN_v0.2_FOR_1.40.zip.html